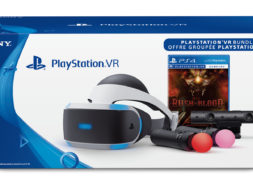 Sony has made a big splash with the release of the PlayStation VR headsets towards the end of last year. And according to recent figures, they’ve sold over a million of these console based headsets. In light of their movement towards the future platform, Sony has made the decision of re-introducing PlayStation VR bundles to the public.

Many people still don’t own the tracking camera nor the Move controllers (tracking camera required for PlayStation VR). To couple the experience, They’ll be selling the bundle once again sometime in February.

There will be two different bundle sets. The first bundle will come equipped with PSVR Demo Disc, PlayStation VR Worlds, the PS VR headset, two Move controllers, and the tracking camera. The second bundle will come with Until Dawn: Rush of Blood on top of the first bundle, available at GameStop and EB Games sometime in February. The bundles will cost $499 just like before.

If you were ever interested in purchasing the PlayStation VR, February will be the time to do so. Sony also recommends running the PS VR headset on their PlayStation 4 Pro. We found some small changes between the original PS4 and the Pro versions in terms of graphics. It’ll depend on your preference and the amount of money you’d like to spend on the experience.