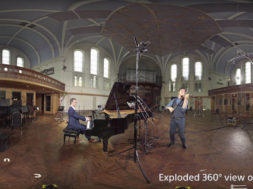 Sony has been releasing a variety of experiences and content for the PlayStation VR headset. They’ve worked together with studios and companies to release exclusives on to the PSVR platform. Recently, Sony enlisted the services of Joshua Bell, a famous Violinist, who was captured in 360 to create a VR experience around his performance.

The setting is intimate as it was filmed at Lyndhurst Hall located in London, UK. Sony used its FD-X1000V action cameras to capture the essence of the performance in 3D. With the use of the PSVR headset, you’ll be free to look around the hall with the tilt of the head.

The performance was also recorded with positional audio tracking which allows you to hear variations in the levels of sound. If you are closer to Joshua Bell, you’ll hear the increase in sound. When you move a distance away from Joshua Bell, you hear the decrease in dB.

The Joshua Bell VR experience is available for free today at the PlayStation Store. You’ll require the PlayStation VR headset along with the camera. Sony looks to release more VR experiences, similar to the one they captured with Joshua Bell. Theater performances and symphonies will be next on the list for Sony and its VR team.