Sony Drops Price Of PSVR Bundle Including Camera To $400 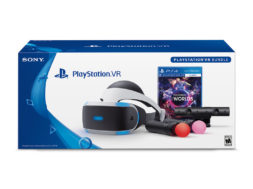 Sony Drops Price Of PSVR Bundle Including Camera To $400

Sony is one of the newcomers to the VR industry where they released their very own VR headset called the PS VR last October. They provided a solution where PlayStation users can purchase the VR headset and play it through their console device. But in order to play on the headset, you required their PlayStation camera, which costed an additional $49 on top of $400 PSVR price tag. But to stay competitive with Oculus and HTC, they have slashed their bundled pricing down to $399 USD (MSRP) / $499 CAD (MSRP).

The initial price for the PSVR bundle costed $449 which included the headset, camera, and the PlayStation Move controllers. But with recent news of price cuts on the Oculus Rift and HTC Vive, Sony has released price cuts of their own. As a matter of fact, the Oculus Rift actually costs as much as the PlayStation VR bundle. The Rift currently provides better quality and performance thanks to the headset being powered by a PC versus a PlayStation console.

“On the horizon, we’ve got a great lineup of games, including The Elder Scrolls V: Skyrim VR, Doom VFR, Sparc, Bravo Team and The Inpatient,” said Sony on their official PlayStation blog post. “The system itself also continues to evolve, as we just announced that the latest PS4 system software update 5.00 will include some enhancements for PS VR like 5.1ch and 7.1ch virtual surround sound in Cinematic Mode.”

There are a lot of announced VR games for the PlayStation VR platform such as Skyrim VR and DOOM VFR by Bethesda so this may be a good time to pick one up if you haven’t done so. Skyrim VR is announced to release on PSVR starting November 17th. DOOM VFR is set to release on December 1st for PlayStation VR. The new price cut will start on September 1st.