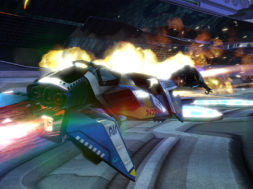 Sony has announced that Wipeout VR will be releasing on PlayStation VR in early 2018. The game takes place in the future where drivers will be racing through urban courses. Players will have to compete to win the the race.

This is in part of their upcoming WipEout Omega Collection which brings together all the content from the previous versions of their games.

Sony hasn’t announced a separate price for Wipeout VR so we’re guessing that users will have to purchase the Omega Collection bundle when the PSVR releases. Currently, WipEout Omega Collection is listed as $39.99.

Playstation VR users, prepare to race in the future in 2018.