Solve The Mystery In Flavortown VR 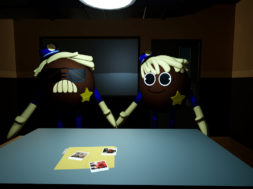 Solve The Mystery In Flavortown VR

Oh no! The Mayor of Flavortown has been murdered and you are the only hope in solving this crime. But the twist is that you are the prime suspect. Get ready to jump into this twisty mystery of Flavortown.

After waking up from a hazy fever dream you’re apprehended by the Flavortown Spaghetti PD. To save yourself from being locked up with Meaty Joe you’ll have 48 hours to hunt down the crucial evidence to prove your innocence.

You’ll get to Explore the colorful and animated world of Flavortown as a Spaghetti Police Department rookie. You’ll begin to investigate the Waffle Watchers, Billy Bonka, and the Garlic Bread Mafia in a wacky adventure with two buddy cop protagonists by your side. You will pick up clues, question suspects, and solve this spicy murder mystery whodunit to finger the guy who really murdered the mayor.

Gourmet BBQ candies made by famous saucatier Billy Bonka – The packaging warns about some minor side effects when ingested.

Loose cannon cops who don’t play by the rules – Join this rag-tag duo of buddy cops in solving the biggest crime to happen yet in Flavortown history.

A serene and accurate cooking simulation – Don’t mind the possible fire hazards or the constant yelling over your shoulder.

Guest voice acting by our friends from CROWSCROWSCROWS – Two amazing guest appearances by the creators of Accounting VR and The Stanley Parable.

Make sure to check out this goofy VR adventure of Flavortown on Steam. The game is available for both the Oculus Rift and HTC Vive for $5.39. If you are into solving silly mysteries, well this might be up your alley.

tags: flavortown vr
previous YouTube VR Is Coming To Oculus Quest
next Netflix Will Be Available On Oculus Quest At Launch
Related Posts