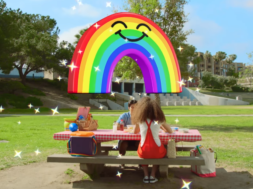 Snap Inc. is in an uphill battle these days with Facebook launching a competitive and similar application to Snapchat. Mark Zuckerberg led the initiative in creating a stories board for both Facebook and Instagram which triggered a massive spike for the company. Just last week Instagram reported that there were over 200 million people using Instagram Stories every day. That is up from January when they reported 150 million active Instagram Stories users.

Snapchat reported that they had 161 million daily active users last month. That’s significantly lower than Instagram’s numbers. And on top of that crushing number, Mark Zuckerberg announced today (during the F8 conference) that Facebook launched a closed beta for a new augmented reality application on mobile devices.

To fend off that mounding pressure, Snapchat has launched a new augmented reality feature called World Lenses. This new feature will allow you to add captions, color, and even Bitmoji to the real world around with. Snap Inc. claims that this new feature is quite easy to use like their whole application is.

How to use the World Lenses:

Unfortunately, World Lenses will not be available to use world-wide. Rather, it’s restricted to specific areas and places for the time being. Snapchat states that this new feature should be expanding to other areas soon though. This will definitely be a welcomed edition for Snapchat users.