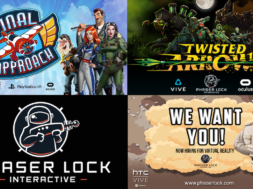 Phaser Lock Interactive was one of the first studios to launch a VR game compatible with the Oculus Touch controller called Final Approach. This aircraft-themed strategy and management title for the Vive and Rift allowed gamers to play as an air traffic controller towering over miniature worlds full of varied aircraft. Phaser Lock Interactive also released their second VR project — Twisted Arrow —  a fast-paced, arcade-style first person shooter that pits the player, armed with a bow and arrow against a city overrun with an evil, high-tech paramilitary force.

With the recent success, Phase Lock Interactive has announced a long-term strategic partnership (in the form of investment) with a successful South Korean game studio, Smilegate, to develop a yet unannounced VR game title. The company stated, “This partnership announcement will be the first of multiple rounds of investment in the future infrastructure and growth of Phaser Lock Interactive.” Smilegate will work closely with Phaser Lock on the vision and production of the VR game, as well as the handling, publishing and distribution.

“We’re excited to work with an accomplished industry veteran like Smilegate,” says Michael Daubert, CEO of Phaser Lock. “They understand the Asian entertainment market better than anybody else, as evidenced by the overwhelming success of their game, CROSSFIRE, the most played online First Person Shooter game in the world with six million concurrent players. We couldn’t ask for a better strategic partner to expand, especially with the lightning fast growth of VR we’re seeing in the Asian market.”

Smilegate is pretty familiar with the VR space, previously investing $40 million in Starbreeze, the creators of the StarVR headsets. The headset is now featured in IMAX VR centers as one of the official headsets for the company.

“We are excited to partner with Phaser Lock Interactive, one of the pioneers in the industry. PLI has shown innovative ways to create user-friendly interaction in virtual reality while also creating compelling game experiences. PLI is our first foray into a virtual reality global partnership initiative. We will continue to explore and identify industry leaders to aggressively facilitate our expansion into the new, emerging industry,” said Joonho Sung, COO at Smilegate.

Phaser Lock plans to release updates on their project with Smilegate in the coming months.