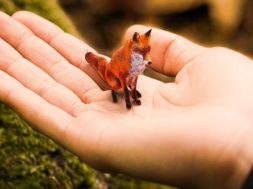 SmarterEveryDay is a popular YouTube channel run by Destin that explores the world of technology and science. In a recent episode, he visited the folks over at HaptX to try on their newly designed haptic feedback gloves. While Destin was never a big supporter of VR, he states that HaptX changed his mind at the end.

In the beginning of the video he explains that Ready Player One was the reason why he decided to try on the haptic glove by HaptX. He wants to explore the current technology that reshapes the human experience in VR.

When Destin first puts on the HaptX gloves, he interacts with a bunch of virtual objects in a unique VR app. In front of him is a small farm with a bunch of objects such as clouds, rocks, stars, moons, sunflowers, wheat, fox, and more. In the video you can see him testing out the sensors on the gloves as he reaches into the clouds. He states that he can feel the individual raindrops from the cloud that he is interacting with.

Destin also notices the force feedback when he picks up objects or when he interacts with the windmill. The current HaptX glove has over 120 sensors on the palm that allows you to feel things when something touches you. Whether it be the fox or the spider walking around, you can feel their legs and movements on the palm of your hand.

“I’m totally against VR,” Destin said in the video. “But this [the HaptX gloves] just changed my mind.” We’re currently seeing a flux of haptic devices being worked on by many VR companies to enhance our virtual experience. Not only does our sight become immersed but our sense of touch and feeling will too.

The HaptX gloves you see in the video is more of a concept model right now rather than a consumer ready version. You aren’t able to purchase it through their website. But we look forward to seeing the different iterations of the gloves in the near future and how it’ll help immerse ourselves deeper in virtual reality.