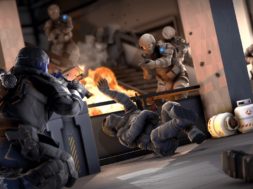 Skyworld creators – Wolfdog interactive – has launched a brand new Kickstarter campaign for a VR game they are currently working on called Panther VR.

Panther VR is a stealth-action game that takes place in the near future where corporations rule the world. You take the role of a Panther Agent where you are recruited by the mysterious guild.

After becoming an agent you can take on contracts to steal secret prototypes and ancient artifacts. Playercs can also plan heists in your secret hideout, choose from a large number of weapons and gadgets, and set your plan in motion. You’ll have the choice to freely explore the large open and heavily secured locations.

In a distant future, ruled by international Corporations, there is always a struggle for power. Most power can be bought with money, everything else can be stolen. This is where the “Guild” comes into place. An international secret organization of master thieves, working for the highest bidder. Only the best are recruited into the Guild and may become a Panther agent.

Once inside the Guild, you must give up your civilian life, and will be assigned to a crew. Take on contracts provided by the Guild, and steal top-secret prototype or ancient artifacts from highly secured locations. Plan out your heist, choose your weapons and gadgets and infiltrate the location. Will you go in like a ghost and leave without a trace, or wreak total mayhem.

Panther VR is currently live on Kickstarter with over $2,000 pledged thus far. The goal is to hit $16.553 with 44 days to go. You can see that the game has already been developing and so the money isn’t being used to start from scratch.