Should You Be Hyped For The Nostos VR game 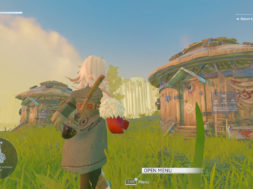 Should You Be Hyped For The Nostos VR game

NetEase Games has been working quite diligently on their new VR title called Nostos. This is a cross-platform multiplayer game that allows both PC and VR users to play together in an open world setting. And while everything we’ve seen so far looks pretty crisp, is it worth considering to purchase?

Nostos will bring some familiar looking graphics that is quite recognizable if you’ve played the most recent Legend of Zelda game on the Switch console. You’ll find the similar look with that paper like feel and the shading of the world with a hue tint.

As far as the game goes, you will take on the role of an explorer in Nostos to adventure, combat, build up and save the world with their partners. As you adventure the world, you will notice the unique ecosystem where the time transitions from day to night and also experience all four seasons.

You will advneture in the grasslands, desert, plains, and the snowfields. You will also notice the abundance of exotic creatures that roam the lands, big and small.

As you continue your adventure, you will experience that the seemingly peaceful world is surrounded by toxic coralseas which corrodes the sole habitat. You will have to battle these creatures from the coralseas who are the enemies in the game.

In the game, you will need to survive with limited resources: restore physical strength with food and water, collect materials and build houses, and use melee weapons or long-range firearms to fight against monsters. Meanwhile, you’ll be working with other players on the quest to discover the historical sites,the remains of war and the secrets of the world.

With a series of physics rules in real life being introduced, players can freely explore the game world, climbing cliffs or driving vehicles.

Nostos shows a lively open world where organisms in the ecosystem can breed on their own. A sapling planted long ago might grow into a forest.

The survival game which is set in the last days of the civilization may gradually reveal the stories of the mysterious ancestors on the land of Nostos.

Nostos shows the world’s end with some sci-fi elements incorporated. It adopts the style of the traditional oriental animated films.

Nostos is set to release on December 6th for the HTC Vive and Oculus Rift along with PC users. The game looks to provide a fun new open-world experience for gamers within the immersive environment. Let us know what your thoughts are on the game.