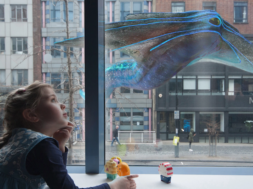 Recently, a talented director by the name of Magali Barbé released a film called ‘Strange Beasts’ that depicts what our lives in the future may look like. In the beginning of the story, you’ll notice that the video seems to be some type of ad for a tech startup company. But as the story unravels, you start to realize that it’s a depiction of our society and how we’re starting to become influenced by mixed reality technology.

Barbé’s film first starts off with an introduction to a young charismatic man named Victor Weber. Weber is the founder of “Strange Beasts” which is an augmented reality game. In “Strange Beasts” you’ll be able to customize and grow your very own creature as a virtual pet. The platform in which he’s created “Strange Beasts” on provides a modern UI with an infinite choice in customization.

Weber goes on to showcase his very own pet named Walter which looks like a mix between a Pokemon and a dinosaur. He then summons a ball for Walter to play fetch with. Weber also shows how these pets can be customized by adding tails, wings, and more to the creatures.

Weber then gives credit to what he calls “Nano Retina Technology” which super imposes computer graphic imagery over real-world objects by projecting a digital light-field into your eyes. But soon after this recap, a dark veil starts to gloom over Weber that portrays the dangers of meshing the real and virtual worlds together (like an episode out of “Black Mirror”).

Through his perspective, we see his daughter, Anna, playing around with her own virtual pet named Blooby. But we soon learn that Anna is only a figment of his imagination which was super-imposed through NRT.

In third-person perspective we see that Weber is just talking to himself rather than his real-life daughter that he thinks he has. NRT has influenced Weber to the point where he’s unable to distinguish the two worlds apart. In his mind, he’s having an event-filled day taking his virtual pet and his daughter out to the park on a bright summer’s day.

While technology this advanced doesn’t exist today, it’s something that can become viable in the near future. Oculus Chief Scientist Michal Abrash even stated that there will be “no sharp line between VR and reality” when we start improving our technology.

Vast amounts of companies are involved in improving AR technology today which will allow you to see digital objects in the real-world. Simply check out what Peter Jackson’s company, Wingnut AR is doing with Apple products.