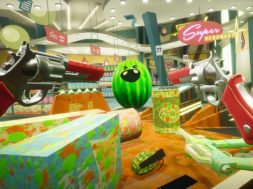 Have you seen Seth Rogan’s Sausage Party movie? Well if you have, Shooty Fruity by nDreams should ring a bell as your mission in the VR game will be to kill some killer fruits and other various foods to defend your local supermarket.

You’ll be fighting in some violent juicy shootout where you’ll be equipped with dual-pistols and other weaponry to take on the swarm of killer fruits. You’ll also have to be scanning your customers foods so don’t forget that part. The motto of the game is Scan! Shoot! Repeat!

Below is a quick description of the game by nDreams:

A WHOLESOME RANGE OF BALLISTIC WEAPONRY!

Become a human blender! Arm yourself with a military-grade arsenal of fruit-killing guns and berry-bursting explosives, including revolvers, shotguns, and bomb launchers. Gain access to increasingly absurd ballistics and customise your loadouts across your melon maiming career.

OUR FRUIT IS 100% GENETICALLY MUTATED!

Tons of vicious and nasty fruit to shoot into pulpy pieces. Unload round-upon-round of high octane ammo into their ripe, fleshy bodies. Then, when that isn’t quite enough, use ridiculous power-ups to pulverise them in other juicy ways.

Completely brand shiny new “shoot and serve” multi-tasking gameplay that isn’t just made for virtual reality, it’s only possible using a VR headset, two motion controllers and an optional supermarket tabard. It’s like the future of work, but right here and now!

Shooty Fruity will be available later this year on all platforms including PlayStation VR, HTC Vive, and Oculus Rift so stay tuned!