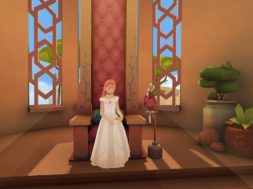 Coatsink is one of the more well known developer names in VR. They’ve worked on a few great VR titles such as the Esper Series and Augmented Empire. Now they look to bring a new story-driven puzzle adventure VR game called Shadow Point to Oculus Quest and Rift.

Shadow Point is a story-driven puzzle adventure VR game that is narrated by no other than Patrick Stewart. He takes on the role of Edger Mansfield who narrates his journal as you explore this new virtual world with the input of the Shadow Point Observatory. Players will ascend via a cable car to the abandoned summit where you discover a portal to another realm.

Guided by the journal of Edgar Mansfield, you will explore a vibrant kingdom, cast shadows and solve mind-bending puzzles as you uncover the mystery of missing schoolgirl, Lorna McCabe who vanished from Shadow Point Observatory twelve years ago.

In the trailer you can see how you will have to interact with various objects to solve these puzzles. For example, using a ball to cast a shadow to unlock a door.

The graphics in this is quite amazing with the texture and colors that provide that warm feeling.