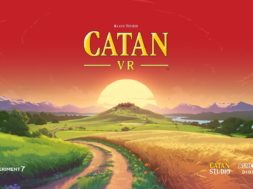 Klaus Teuber’s modern board game, Catan, has brought joy to millions around the world. First released in 1996, the board game allows you to create settlements, barter with friends, and expand your empire on the mysterious island of Catan. And due to all the recent success, Catan Studio, Asmodee Digital, and Experiment 7 has announced that they’ll be releasing Catan VR for the Oculus Rift and Samsung Gear VR.

True to the classic, but optimized for virtual reality, Catan VR allows tabletop fans and new players alike to experience the best-selling board game in a fresh, fully-immersive format.

“The first time I saw Catan on the Magic Table, I was fascinated by what VR has to offer,” said Catan creator Klaus Teuber. “The game I made in our living room with my family 25 years ago in Virtual Reality? It’s incredible. I never imagined actually stepping into the world of Catan when we first started making cut-outs and dreaming about exploring new lands.”

Catan VR will pit you against friends and foes around the world where players can watch the island come to life in VR for the very first time. The game will feature a lush and beautiful environment where the experience is enriched in details.

Catan VR players will have access to cross-play functionality. This means that Oculus Rift players can face-off against Samsung Gear VR users which greatly improves the player’s pool and talent. So if you have a friend that owns an Oculus Rift but has access to the Samsung Gear VR, you’ll still be able to play this epic board game with them.

For those of you unfamiliar with Settlers of Catan, here is the basic overview and tutorial for the game:

2. Each “Victory Point” card is worth one victory point.

4. Determine the turn order by the roll of the dice. The person who rolls the highest number gets to choose their color and take the first turn in the game.

5. You will now place the settlement on the island of Catan. The person who rolled the highest number gets to choose first where they place the first settlement. You will be able to place one road on one of the three available intersections.

7. Now the player rolls the dice. If the number you rolled corresponds with the number of your settlement, then you get to pick up a resource card of that terrain hex.

8. After the dice are rolled, the player then has the option of either building structures like roads or upgrading settlements for your cities

9. If you happen to roll the number 7, you will unleash a robber that gets to take one card from whatever player you’d like. Additionally, if a player has more than 7 cards in their hands they must discard half of them.

Settlers of Catan VR game is set to release on Oculus Rift and Samsung Gear VR during the upcoming holiday season. Make sure to stay tuned for the latest update about the upcoming game.