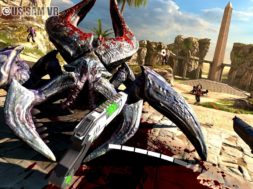 Croteam has announced the full launch of Serious Sam VR: The Last Hope for the HTC Vive and Oculus Rift. This intriguing VR game has been in Steam Early Access for quite some time now but has made its full launch today with many improvements and updates.

Serious Sam VR: The Last Hope takes place during the first Menal War where Earth’s defense forces are crumbling under the hordes of the vicious Mental. The antagonist managed to break  the will of many nations by destroying the ancient shrines of the native people. So a fearless EDF captain by the name of Sam ‘Serious’ Stone emerged to defeat the evil forces by leading the resistance from the battlecruiser ‘BC Saratoga’ in a desperate attempt to save the galaxy.

In the game you’ll have access to various powerups, weapons, and items to help you defeat your opponents. For example, you can set up turrets that can help you kill the alien enemies.

Since their introduction of the game 11 months ago, Croteam has expanded the universe to five different planets, added many new weapons, and even a skill update that included 36 powerups and 190 different weapon upgrades. The final update introduces a new playable character Serious Sammy and randomly generated missions for limitless gameplay for the most hardcore Serious Sam VR community. The new featured gameplay will be available in 5 existing levels alongside three new ones.

Arena – This mode allows players to enjoy endless variety thanks to randomly generated waves of enemies that ensure every playthrough is completely different. Players are challenged with 8 arenas consisting of 4 waves, each playable on 20 difficulties. Beating an arena difficulty awards a weapon upgrade icon.

Endless Wave – In this mode players will face an endless wave of enemies, trying to stay alive as long as possible, and get bragging rights over their peers via global leaderboards.

Daily Challenge – Endless wave on the arena map of the day, where each day a new set of enemies is served so that everyone playing faces exactly the same challenge and competes against the rest of the world.

Serious Sam VR: The Last Hope is available on Steam and Oculus for $29.99 which is a 25% discount for a limited time. Make sure to check out the wild VR game as it brings a new type of thrill to the virtual world.