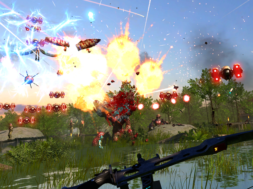 The update features a new planet – Valtos – featuring four different locations and maps in which Sam will wage war on. The locations include ‘The Swamp’, ‘Ancient Breeze’, ‘The Old Forest,’ and ‘Green Dream’. In addition to the new locations, the Valtos Update includes six different enemies: Kalopsy, Siren, Swamp Monster, Air Trooper, Technopolyp and Air Sniper Trooper. After defeating these six enemies, Sam will then have to defeat Swamp Hive boss.

To help him in his mission, the arsenal also got a pretty gnarly update. With even deadlier weapons, new additions including a bow with piercing/explosive arrows and the deadly Devastator are all at Sam’s disposal to tackle these creepy alien creatures.

For VR gamers who like intense shooting carnage, Serious Sam is for you. This update was among many other releases for Serious Sam VR such as The First Encounter and The Second Encounter, all released this month. The Valtos Update is available on Steam for HTC Vive and for Oculus Rift.