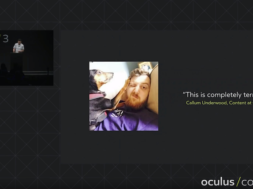 Oculus has been seeing some drastic changes on their team as of late with recent departures from Palmer Luckey – founder of Oculus – and Chris Dycus who was the first hire at the company. And that list seems to be growing as Senior Developer Strategy Callum Underwood announced that he’l be leaving Oculus at the end of the month.

In a blog, Underwood posted that July will be his last month as he’ll be pursuing a career with an indie dev studio, Raw Fury.

Raw Fury are probably 1% of the size of Oculus in terms of team size. I’ll be able to irritate everyone at the company at once, and that very much appeals to me. I didn’t even realise I wanted to join them until I had lunch with the CEO, Jonas, at GDC. We spent the whole time waxing lyrical about state of the industry, how people should treat each other, how publishers should treat devs, how we’re all as fucked up as each other, no matter our position or company we work for. I came out of that lunch with a smile on my face. I knew I had found my next home. Also they published Gonner and Kingdom… if you’ve played those games, I need say no more. My plan is to help them find the next pieces to that growing tapestry of games. I’ll be scouting out games, funding them, helping indies, and generally doing what I love best.

Underwood announced that he’ll be doing this under his new entity called Robot Teddy. He also stated in his blog how appreciative he was about his opportunity with Oculus. They provided him with a small office in his hometown, gave him additional time-off and even offered him with 4 months paternity leave during his professional career with the company.