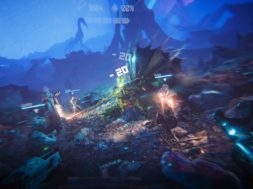 While there’s been a lot of VR shooter games in recent year, we are excited to hear that Multiverse Inc. is bringing Seeking Dawn to HTC Vive and Oculus Rift. The company announced its plans to expand their reach and go cross-platform with plans to release the title on July 12th. They will be releasing the game on the PSVR some time later this year.

The studio promised a full-length VR game which will offer 20 hours of gameplay in single player mode. Seeking Dawn will also be playable in co-op settings with up to 3 other users. There will also be other game modes available such as multiplayer deathmatches.

In Seeking Dawn you will be able to craft an arsenal of weapons and equipment with its own unique feel and purpose. You can construct your own base and fortify it to shield yourself from oncoming enemies.

Seeking Dawn is an expansive VR action-survival game set on a sprawling and dangerous planet full of exotic flora and bloodthirsty native creatures intent on ridding their territory of intruders. If the planet trying to scrub you from its surface wasn’t enough, you must also defend yourself from an opposing, dominant force in the ongoing intergalactic war.

Harvest what you can, build what you want, and be quick on your feet – with deadly foes of all shapes and sizes, you’d best be armed to the teeth when you take them on.