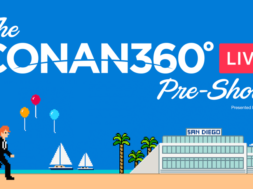 In what seems to be a yearly tradition now, Conan O’Brien has headed down to San Diego to host his show at San Diego Comic Con. With many exciting announcements to take place, Conan will be putting on a spectacle with a packed roster including stars from the upcoming Netflix movie Bright, the new Warner Bros. film The LEGO Ninjago Movie, HBO’s Game of Thrones, The CW’s Supernatural and a surprise film cast to be announced. CONAN‘s Comic-Con International shows will be taped at San Diego’s historic Spreckels Theatre on Wednesday, July 19 – Saturday, July 22.

On top of this seemingly exciting roster, Conan has launched a new segment called CONAN360 Live Pre-Show where he’s giving fans a bonus look inside Comic Con plus some exciting interviews with some special guests including the creators behind Suicide Squad.

During yesterday’s livestream, we got to see some of our favorite team members from Conan O’Brien’s staff including Aaron Bleyart who’s in charge of the show’s “Clueless Gamer” segment and the infamous Jordan Schlanksy, associate producer of the show.

Conan also provided us with a tour of his office where he talks about some of the things in his office. One of the most interesting items was the half-skeleton Pilsbury dough boy where you could literally see his inner-bones.

Team Coco Digital will be continuing the live stream of CONAN360° LIVE Pre-Show hosted by comedy duo Chris Redd and Moses Storm and presented by AT&T. Featuring Comic-Con® themed guests, CONAN talent and tons of fan interaction, the LIVE Pre-Show is being shot and streamed in 4k 360-degree video using four separate Nokia Ozo cameras – one on the roof, one on the CONAN stage and fan interaction stations in the theater itself and at the celebrity entrance, where fans wait to greet CONAN’s incredible guest lineup.

Each 360° pre-show is being broadcast to Facebook Live, YouTube, teamcoco.com/360, and the Team Coco app directly from the roof, giving fans a chance to interact directly with the hosts, as well as watch pre-taped VR content from CONAN’s home on the Warner Brothers lot, featuring exclusive interviews with CONAN favorites like Jordan Schlansky, Sona Movsesian, Bill Tull, and, of course, Conan himself.

After the first Pre-Show on Wednesday, future live shows and Facebook live “re-airs” will be broadcast at these times (all PT):