SDCC 2019 – Doctor Who: The Edge Of Time TARDIS Coming To VR 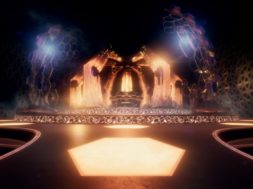 SDCC 2019 – Doctor Who: The Edge Of Time TARDIS Coming To VR

Oculus alongside BBC Studios have announced that they will be bringing a cinematic, feature-length Doctor Who VR game title to San Diego Comic-Con. For fans of the franchise, you can actually check out the experience Doctor Who: The Edge of Time at the BBC America Booth (#4129).

In the experience, you will be able to co-pilot the TARDIS with the Doctor (voiced by Jodie Whittaker) to explore the nooks and crannys in crossing the space time to a series of unique locations within VR.

The team of designers, sound, and software engineers were able to bring this project to life spening over 1200 hours on this project. You will find precise functionality of the controls to be true to the show, behaving exactly as the do on screen. And to round out the experience, youw ill be able to access the infamous custard cream biscuit dispenser.

“The TARDIS is a very important and hugely iconic element of the show and Doctor Who: The Edge of Time offers the chance to experience it like never before,” said Director Marcus Moresby. “It’s been a huge undertaking to deliver the very best TARDIS experience and is much anticipated by fans of the show. We know they’re going to love it.”

Doctor Who: The Edge of Time will launch on the VR platform later this year in 2019.