FUN: Get Ready to Catch some Virtual Babies Falling from the Sky in this Quirky VR Game 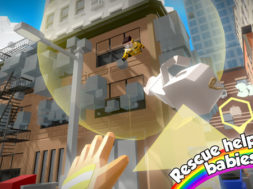 FUN: Get Ready to Catch some Virtual Babies Falling from the Sky in this Quirky VR Game

It’s not everyday you see a children’s hospital burning down and firefighters tossing babies at you. But you’ll see plenty of that action happening in Rescuties VR. This quirky fun game challenges you to catch as many babies as you can from the sky as firefighters toss them from the burning building. You’re tasked to catch them, give them some kisses, and gently toss them into ambulances.

Rescuties VR was originally funded on Kickstarter reaching $8,691 by 184 backers. The game was then launched on Steam on October 16th of last year where it drew in a bit of attention. The VR game now features ten different disaster scenarios where you must rescue babies from extreme environments. The visuals are more along the lines of Minecraft rather than the traditional crisp CGI we’re used to seeing. Nevertheless, it provides tons of fun due to its ridiculous scenarios that the VR game puts you in.

Below are some of the features you’ll find in Rescuties VR:

Many famous YouTubers such as PewDiePie have reviewed the game which provided tons of enjoyment. The game is currently available on Steam for $4.99 and the Oculus Store for $9.99. If you’re trying to have some fun on VR, this would definitely be worth the purchase. Who knows, maybe one day you’ll have to rescue a baby from impending doom.