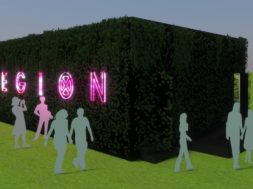 FX Networks has teamed up with Marvel to launch a new super-hero series called ‘Legion’ starring Dan Stevens as David Haller who is a troubled young man that finds out that he may be more than human. To tribute this new successful launch, they’ll be displaying a new immersive experience to go along with the franchise at this year’s San Diego Comic Con. Produced by HERE BE DRAGONS, “Sessions: The Legion Mixed Reality Experience” will be FX’s main feature at their FXHibition 2017.

“Sessions: The Legion Mixed Reality Experience” will take fans into the headspace of David Haller where viewers will be able to interact with his world and test the boundaries of their own reality. Fans will go through key scenes as seen in Legion season 1, and for the first time, get a sneak peek into season 2. In addition to full use of Microsoft’s HoloLens, the MR experience will feature real-life actors throughout the experience for a full emergence into the world of Legion.

FXHibition will be taking place just outside of San Diego Comic Con at the Hilton Bayfront Park.

HERE BE DRAGONS is a specialized and focused production studio that supports the world’s leading creative innovators in Virtual Reality spherical filmmaking. They’ve launched many unique VR experiences in the past including “The Possible” series. They’ve also brought on the Former President Of Tumblr John Maloney as their Network Producer.

Make sure to attend FXHibition if you’re a fan of immersive experience and super-heroes as “Sessions: The Legion Mixed Reality Experience” will surely be a sight to see during this year’s San Diego Comic Con.