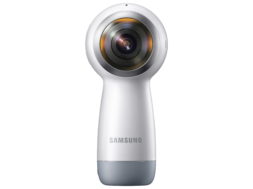 Tomorrow marks the release of Samsung’s updated Gear 360 in the United States. As mentioned in the model’s name, it is a 360-degree camera. Available in stores and online on Samsung’s website and ShopSamsung app, Best Buy, Amazon, AT&T, Sprint, T-Mobile, Verizon, and US Cellular.

In addition to aesthetic updates, the new model can capture real 4K videos and can livestream 360-degree footage at 2K resolution through a compatible phone, including newer iPhones. It also clocks in at a lower price of $229 in comparison to it’s predecessor’s price of $350 when it launched. Currently, you can buy the older model for a lower price point of approximately $160 on Amazon.

While these updates are great, the camera does have a couple of short comings. The battery is smaller, which results in shorter battery life, and the removal of the tripod for a pedestal base makes the camera less stable.

Samsung is also offering a bundle in which customers looking to buy a Galaxy S8 or S8+ can purchase the new Gear 360 for only $49. This deal will run from May 25th to June 19th. This is not the only bundle Samsung is offering right now. On Monday, we featured their buy one get one deal for a brand new Galaxy S8 VR ready smartphone with bonus Entertainment Kits and free 6 month Netflix subscriptions for each device. Check out that deal here!