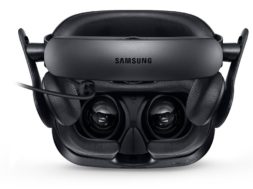 Samsung currently has two VR headsets on the market. The first is the Samsung Gear VR which provides a tetherless experience using a Samsung smartphone. The next HMD is the Samsung Odyssey which is powered by a PC, equipped with an OLED display. It is a part of the Microsoft Windows mixed reality platform along with various other headset manufacturers.

Now we are hearing that Samsung might be working on their third HMD which will provide both augmented reality and virtual reality experiences serving as a true mixed reality headset. Oh, and it will be wireless.

“Samsung Electronics is working on developing cordless and high-priced headsets supporting both VR and AR. Definitely, Samsung plans to use in-house application processors, OLED displays and sensors. But more importantly, Microsoft has lowered its demand for royalties as it is taking a multi-pronged approach to delivering a rich ecosystem of games and applications that will entice users,” said a Samsung official by telephone to The Korea Times.

This means that we might see a co-branded mixed reality headset in the works, similar to how Google and Lenovo branded the Mirage Solo headset.

“VR was once tapped as the next hot technology. However, despite sizable investment in it, the technology failed to resonate with consumers. Now, Samsung thinks the mixed reality market is a bit more promising than VR or AR in wider usability and adaptability. As we achieved in the ‘phoneblet’ market, Samsung has stronger intent in the consumer market with the firm’s new devices supporting mixed reality technology,” said one of Korea Times sources.

Reportedly, Samsung will showcase the new mixed reality headset at the upcoming IFA conference in Berlin taking place in August.

Currently, there are many various headsets to look forward to in the near future. This includes the Oculus Santa Cruz (which might debut as a mixed reality headset), Pimax 8K, Magic Leap One, and the Vive Focus (western markets).

tags: samsung gear vr samsung odyssey
previous Through The Fire And Flames By DragonForce Makes Its Way To Beat Saber
next Next Generation DLC Coming To Star Trek: Bridge Crew On May 22nd
Related Posts