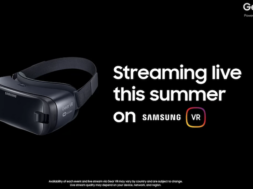 Samsung seems to have a lot of plans oriented around live broadcasting through their Gear VR device. In a recently launched video the company showcases many events that’ll be live-streamed in 360 including a UFC match in Brazil, X-Games in Minneapolis, Minnesota, and a concert in partnership with Live Nation. Samsung has emphasized how this new way of viewing events will allow you to be in the front row without having to leave your house, “All in real time.” Samsung recently expanded its global presence to 45 countries, enabling more consumers around the world to enjoy the Gear VR platform.

“We are excited to offer Samsung Gear VR users the opportunity to experience their favorite live music and sporting events through our industry-leading VR ecosystem,” said Younghee Lee, CMO and Executive Vice President, Samsung Electronics. “Partnering with these companies to expand our VR services helps us to open up a new gateway of opportunities for fans and demonstrate our commitment to delivering experiences that make the seemingly impossible, possible.”

Dates for the events:

“We’ve always felt that the potential of combining UFC events with virtual reality would give our fans the ultimate enhanced experience,” UFC Chief Operating Officer Ike Lawrence Epstein said. “We’re excited to partner with Samsung on this game-changing initiative to further revolutionize how fight fans consume our content and live events around the world.”

Samsung has also partnered with SLIVER.tv to live-stream Esports events and gaming. They have brought tournaments such as Dreamhack Masters to life in 360 on top of the Intel Extreme Masters tournament. These newly announced live broadcasts will be a refreshing slate of coverage welcomed by Samsung Gear VR users.

Currently, there are more than 4.51 million Gear VR headsets deployed around the world with a majority of people using mobile VR headsets. With this factor it makes it an attractable platform for companies to partner up and experiment with live-streaming their events in 360. While only 3 events were announced to be live-streamed in 360, there may be more in-store over the course of the summer.

Samsung has stated that live stream via Gear VR may vary by country and are subject to change. Live Pass will be available on the Gear VR at no cost. Stay tuned for the latest news in regards to Samsung’s plan with their newly announced Live Pass feature.