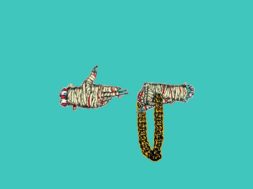 Killer Mike and El-P have recently dropped an album over the Christmas holidays called Run The Jewels 3 as a digital download. But today, they released the physical version to the public in the U.S. And as a special experimental way to promote the album, they released a free iOS app called ARTJ.

Run The Jewels’ publicist said, “ARTJ – an Augmented Reality-based platform uniting RTJ’s passion for art & technology with their desire to reach fans in new and compelling ways. Artwork from RTJ3 vinyl, CD, posters, stickers, even t-shirts and digital images, have all been enabled for AR, and unlock customized RTJ visuals on your phone when pointed at the image. Featuring original content from RTJ allies Tim Saccenti, Hector Arias, & Nick Gazin (with more artists TBA).”

RTJ has plans to release more immersive experiences in the near future in expansion to their musical talents. The duo has even released a virtual reality version of their song “Crown” through New York Time’s VR App.

Run The Jewels 3 was released for free so if you’ve yet to download the digital album, go ahead and check it out.