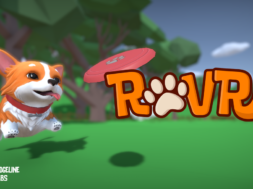 If you’re one of those people that are too busy to own a dog, have no fear. A VR startup called Ridgeline Labs has just solved this problem for us with their new VR app called RoVR. This new experience is the first high quality VR pet simulator that allows us to raise, interact, and train these adorable creatures at our leisure.

“Right now, the VR landscape primarily consists of action, shooter, and horror games targeted at hardcore male gamers” said Henry Zhou, co-founder and CEO of Ridgeline Labs. “However, we want to use the immersive properties of VR to create emotionally compelling experiences that everyone can enjoy. Consequently, we turned to dogs, the most lovable pet a person can own! Using VR, we want everyone to be able to have the dog ownership experience, just like we always did growing up.”

Ridgeline Labs focused on making RoVR feel as if you were raising a real dog. Whether it’s feeding, playing fetch, petting, or going for a walk, there are many activities players can do that will make them feel like they own a real dog.

Additionally, as time goes on, the dogs will start behaving the way that the owners have raised them through actions and commands. Essentially, it’s like the Tamagotchi game but only a thousand folds more advanced and realistic. RoVR will be pushing the boundaries between realism and simulation.

● Genuine Interactions: ​Pet and give tummy rubs to your VR dog like you would a real dog! Teach your VR dog custom tricks. As you build trust with your VR dog, its behavior will adjust as well.

● Activities:​ Compete in agility competitions and find special goodies on walks. Explore a world full of people and places with your new best friend.

● Nurture: ​From feeding to going on walks, there’s many ways of showing your affection in RoVR.

● Customization​: Get the camera! There are so many costumes and accessories to dress your VR pet up with.

The beta for Vive only is aimed to be released Winter 2017 followed by the early access release during March 2018. RoVR is set to release on Oculus Summer 2018 for the Rift headset. For those interested and excited about RoVR, make sure to check out their Kickstarter campaign. You can pre-order a copy for the early bird price of $15.

Ridgeline Labs is one of the very few teams that have been accepted into MIT’s Play Labs program.