ROGAN: The Thief In The Castle Looks To Be A Very Interesting VR Game Experience 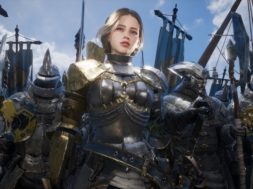 ROGAN: The Thief In The Castle Looks To Be A Very Interesting VR Game Experience

Update: Rogan: The Thief In The Castle is now available on Steam for VR users. There’s a plethora of updates that have been added to fix the issues many users have been facing.

Smilegate Entertainment has recently announced news of their new VR title called ‘ROGAN: The Thief in the Castle’ and it looks to be a very interesting game.

Set in medieval times, ROGAN : The Thief in the Castle is an epic VR adventure saga. You will have to take form of a thief where you sneak into a heavily defended castle with a life-risking mission on the line.

Story of ROGAN: The Thief in the Castle

Blackstone is a castle built for battles located in a remote area of the kingdom. Lord Conrad of Castle Blackstone was once a lionhearted knight, but is now old and sick. One night, Conrad was found dead in his study and it appears that he was murdered.

Knight Victoria, known as one of the lord’s most trusted confidants, is suspected to be the culprit. Witnesses saw her running out of her room covered in blood. So the only option for Victoria is to flee. So the guards put Castle Blackstone on high alert with everyone searching for the knight that murdered Lord Conrad.

It so happens that a thief has also snuck into the castle and his name is Rogan. And due to chance, Victoria runs into Rogan during her escape.

Victoria realizes that this thief is her only hope to clear her name. Believing in her innocence, Rogan decides to help Victoria find evidence of the real murderer in Castle Blackstone.

In the trailer you can see that the game will involve a lot of stealth around an intriguing storyline. You will have to solve mysteries, avoid guards, find clues, and save Victoria from getting killed. You will also help her clear her name.

ROGAN: The Thief in the Castle is set to release some time in July 2019 on both the Oculus Rift and HTC Vive for $26.79. This VR game looks to be quite interesting and might be worth a look. What are your impressions? Let us know!

tags: adventure vr game ROGAN The Thief in the Castle smilegate entertainment thief vr game
previous This Is What Unearthing Mars 2: The Ancient War In VR Is All About
next Things Get A Little Rowdy In Hotel R'n'R In VR
Related Posts