Update: They have changed the release date to December 15th.

Rockstar has confirmed the rumors that were floating around about turning LA Noire into a VR experience. Today, they have officially announced that LA Noire: The VR Case Files will be coming to the HTC Vive on November 14, 2017.

LA Noire: The VR Case Files will feature seven select cases from the original game rebuilt specifically for a virtual reality experience on the HTC Vive. Rockstar Games will also be releasing new versions of LA Noire for Nintendo Switch, PlayStation 4, and Xbox One.

For those unfamiliar with the title, LA Noire takes place in the seedy and violent underbelly of 1940’s Los Angeles as decorated veteran and newly minted detective, Cole Phelps investigates an escalating series of cases inspired by real-world crimes.

Each successfully solved case brings Phelps greater success, but also brings him closer to the dark criminal heart of post-war L.A. The game was an Official Selection of the Tribeca Film Festival for its cinematic approach to gameplay and narrative back when it was originally released on the console platform. 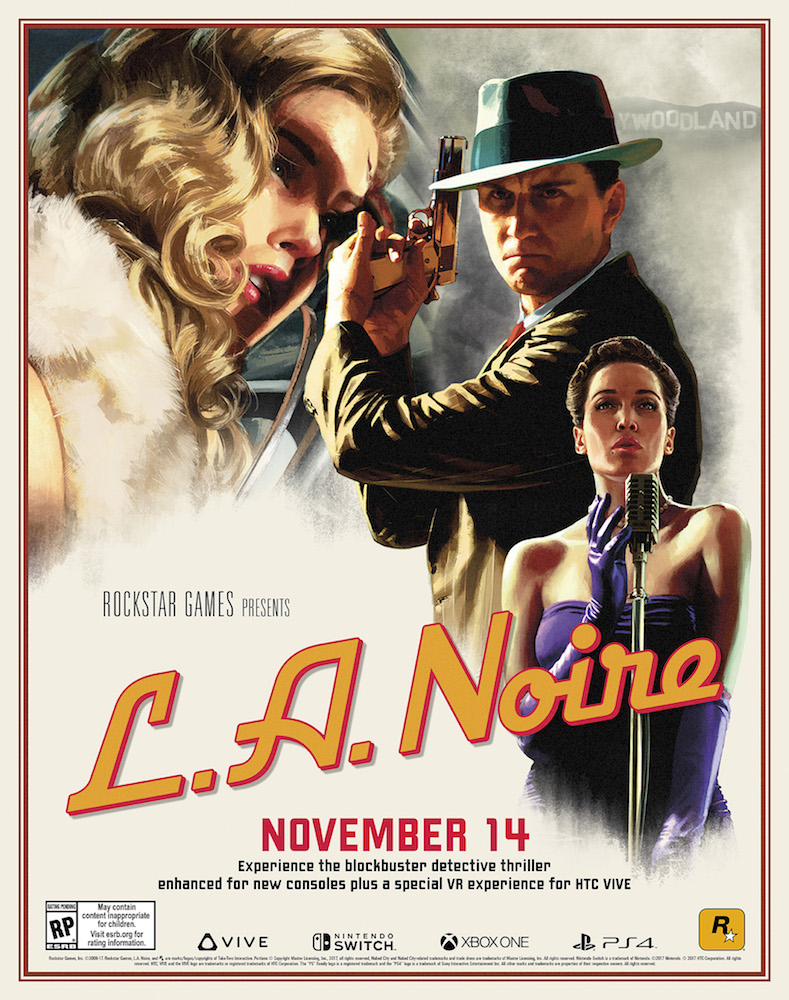 “We’re excited to bring LA Noire’s unique mix of real detective work, classic Hollywood atmosphere and thrilling action to these new platforms,” said Sam Houser, Founder of Rockstar Games.  “Now with a choice of spectacular virtual reality, stunning 4K, or the freedom of portable play, these enhanced versions are a perfect opportunity for players to experience this richly detailed world in a whole new way.”

Rockstar Games has Utilized a unique type of facial capture technology called MotionScan, which breathes new life into LA Noire. Characters are enriched and enhanced to bring that lifelike facial expression to the game.

There isn’t any confirmation on whether the game will be locomotion based or teleportation. It’s also not yet confirmed on how long the gameplay will be for the LA Noire: The VR Case Files experience.

L.A. Noire for the Nintendo Switch will feature the complete original game and all additional downloadable content, with specific enhancements including a Joy-Con mode with gyroscopic, gesture-based controls, HD rumble and new wide and over-the-shoulder camera angles, plus contextual touch screen controls for portable detective work.

Stay tuned as we bring you further news about the LA Noire: The VR Case Files experience for the HTC Vive.