Rock Band has been an iconic game for about a decade now with some outstanding game play and enjoyment. I remember playing this game as a kid jamming out to my favorite songs while smashing those buttons on the guitar. But the franchise has gradually vanished in the gaming world over time.. until now.

Harmonix released a trailer of their iconic Rock Band game that’ll make it’s way on to the Oculus Rift. With the use of the newly released Oculus Touch controllers you’ll be able to jam out to your favorite tunes once again, but this time in the virtual world.

For the setup, you must place the Oculus Touch contoller on the guitar to get 3D tracking of the plastic instrument. So it is a requirement if you are wanting to play Rock Band VR on the Oculus Rift. 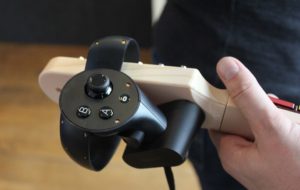 The game was first teased December of 2015 by members of Oculus but has been pushed back for further development. Since then, Oculus and Harmonix have re-calibrated and adjusted the game enough to where they can now finally announce the release date of the game (most likely Q1).

Rock Band VR will initially start with just the guitar as the instrument. It’ll feature many hit songs such as, “Through the Fire and Flames” and other iconic titles. You’ll find the similarities and the subtle differences in gameplay. You’ll also notice different modes in Rock Band VR which will place you as the leader of the band.

Here’s the video of Rock Band VR being played in Pre-Alpha Build. The game seems similar in some ways to the original but incorporates different attributes as well.