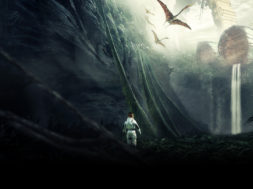 Robinson: The Journey from Crytek is now available on the HTC Vive. This has been a long time in the making ever since it released on the Oculus Rift.

The cool thing about this new release is that anyone who already owns a copy on SteamVR can play Robinson: The Journey for free on the HTC Vive. So if you’ve already played through it on the Oculus Rift, you can experience a new journey through the Vive.

In addition, Crytek has added support to the Oculus Touch so now every Rift user can play the game using the motion-sensor controllers.

For those of you unfamiliar with the title, Robinson: The Journey is a story about a young boy who crash lands on a foreign planet called Tyson III which happens to be filled with prehistoric dinosaurs. Robinson is left stranded and must rely on his wits and his AI companion HIGS to survive the dangerous world.

The gameplay is about 3 to 4 hours in total and you’ll be solving various puzzles, climbing through rough terrain, and hide from danger in-order to save the crew.

Robinson: The Journey was created using Crytek’s proprietary software called Cryengine. The game features beautiful graphics and animations that can only be experienced through the game itself.

For those of you who haven’t yet played Robinson: The Journey, you can go to Steam today and purchase the VR game for $39.99. The game is also available on PSVR.