Ripcoil is an exclusive Oculus title set in a futuristic sports arena. It’s a multiplayer game where two robotic opponents face off in a disc throwing duel. The rules of the game are simple. Two players take turns in throwing the disc. The goal is to prohibit your opponent from catching and tagging five goal sections. The disc can be rebounded off the wall or punched back at high speeds. The disc can also be shot directly to the opponent. There are two inner purple plates that can deflect the direction of the disc. One disk allows it to move towards the outer wall and the other, directly to the opponent. It can only be used once then appear again in the next round after the player scores. 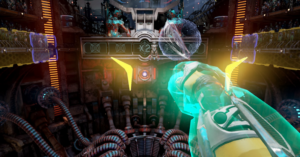 The game mechanics is somehow like 3D VR Pong. If the disc goes behind your goal, the other player gets the point. To defend, the player has to move the body slowly back and forth. With the Oculus headset, you’ll notice and adjust to the motions organically. The challenge of the game lies on catching the disc, wherein the player should not allow it to pass through.

The game starts on a site map with a fully animated avatar made for you. The game experience in Ripcoil is highly immersive because the players can feel like their legs are moving from a locked standing position. The fast action and responsive control of the game provides a realistic and exciting experience. The use of Oculus Touch controllers provides a full hand and body control for effective throw and catching action of the players. This VR game also has a voice chat integration that adds more fun to the player’s interaction.

It was created and published by Sanzaru Games Inc., an American video game development company founded in 2007 in Foster City, California. It’s the second PvP (Player versus Player) game released by Sanzaru on the Oculus Rift. Ripcoil is an action sports genre recommended for everyone. Get a chance to check it out for yourself!