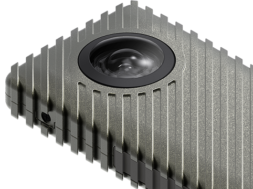 Ricoh has established itself as one of the leaders in 360 cameras. Following the success of the Theta S 360 camera, they look to push the boundaries of modern video capturing technology with the launch of the R which will allow users to live stream 360 videos with ease. Ricoh has documented early test trials with the mobile 360 camera at events such as live concerts and school enrollment ceremonies. This allows streamers to tune in with a more immersive experience versus the traditional 2D form. The R camera by Ricoh will also be the first to livestream 360 video content for 24 continuous hours.

The Ricoh R will first be available as a development kit for people looking to create opportunities with the upcoming 360 camera. Developers will have a chance to create opportunities with the camera and figure out new ways for it to be used. 360 cameras are relatively new to the market and having the ability to livestream in the format is even more foreign to the general population.

When this camera is doing continuous livestreaming, it will be able to stream at 2K resolution with 30 FPS (framers per second). Livestreams will be output through USB or HDMI. Recordings will be saved through Micro SD cards that you can insert into the camera. The files will be saved as an MP4 in H.264 format. The approximate size for these files are around 120 MB per minute. However, the camera does not have a built-in batter so AC adapters must be used. The size and resolution isn’t exactly perfect for VR but for casual settings, it’ll be a great alternative to traditional videos.

Ricoh will also be demonstrating the new camera at CES by livestreaming from the R camera for 24 hours. We’ll be providing more updates from CES 2017.