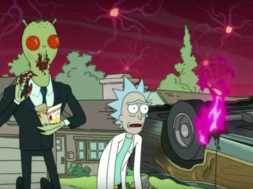 Oh, what it must feel like to be Justin Roiland, creator of Rick and Morty.

During a press conference at San Diego Comic Con this year, Roiland made a big special announcement. No, it wasn’t about the hit TV show or VR. It was about him receiving a special jug of Szechuan sauce from McDonald’s next week.

Roiland told reporters that he plans to record himself and co-creator Dan Harmon while tasting the rare nugget sauce. Whether it’s good or bad, Roiland will be capturing it on footage for all of us to see.

Roiland has long sought out the sauce ever since it was discontinued. The Szechuan Sauce was part of the release for Disney’s animated movie, Mulan and hasn’t been available to the public for two decades. He actually heard that it was available during the 2010 Winter Olympics and tried to get his hands on the sauce. “I heard they had a limited batch at the 2010 Winter Olympics in Canada,” Roiland told reporters. “I called every McDonald’s in L.A. and went online. I even might have tried to connect with people in Canada to see if they could mail it to me ― and that failed.”

It’s apparent that he has a special place in his heart for the sauce. During the Season 3 premiere of Rick and Morty, Rick Sanchez declared to his grandson Morty that he’ll somehow get his hands on the Szechuan Sauce. Roiland does all of the voicing for the two main characters in the series.

After watching the episode, fans took to the internet and signed an online petition asking McDonald’s to bring back the sauce. It currently has over 41,000 signatures.

In response to this hype, McDonald’s spokesperson provided a statement to HuffPost that it’s willing to consider bringing back the rare sauce.

“We never say never, because when our customers speak, we listen,” the spokesperson said. “And to paraphrase some of our most enthusiastic fans, our sauce is so good that it would be worth waiting nine seasons or 97 years for.”

Justin Roiland has it all.