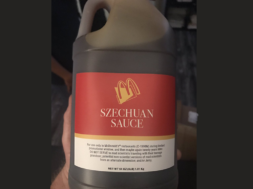 The wait is finally over. Justin Roiland, the creator and voice of Rick and Morty has finally received his long awaited Szechuan Sauce from McDonald’s. Hooray!

Originally made in 1998, the Szechuan Sauce was produced in partnership with Disney for promoting their upcoming movie, Mulan. Roiland was infatuated with the taste and has been craving the sauce all this time ever since they stopped manufacturing the sauce.

This is a special occasion for Roiland and his fans as McDonald’s has stopped producing the sauce 19 years ago. But out of respect for Roiland, McDonald’s decided to send him this gift in a special container for him to enjoy. In a thoughtful and clever letter, McDonald’s told Roiland how they achieved to get him the Szechuan Sauce.

We finally did it. It took months, but we’ve finally brought back some Szechuan Sauce.

We’ll spare you the physics, but turns out, Dimension C-1998M is a dimension where it’s always 1998. 1998 every day. No smartphones, no social media. It’s a weird, scary place. But they’ve got Szechuan Sauce on the regular menu.

So here we are with some precious cargo- the Szechuan Sauce you remember and some sou-venirs from some for the dimensions we tried along the way.

We wish we could’ve brought more sauce through, but we couldn’t risk keeping a portal like that open. Think about it, if you knew in 1998 that McDonald’s would have All Day Breakfast in 2017, would you really want to stay in 1998. Of course not. If we left the portal open, we’d have puka shells, bucket hats, and boy bands as far as the eye could see. It’s too risky, even for sauce as delicious as this.

A few lucky fans will also get to experience the glory, but the first bottle in this dimension is for you.

In the letter it states that a few lucky fans will also get to try Szechuan Sauce. We don’t know how yet but they will probably have some sort of competition or giveaway.

On the jug it reads:

For use only in McDonald’s restaurants (C-1998M) during limited promotional window, and then maybe again twenty years later. DO NOT SERVE to mad scientists traveling with their teenage grandson; potential non-scientist versions of mad scientists from an alternate dimensions; and/or Jerry.

Just Roiland has promised that he’ll be releasing a reaction video of him trying the sauce. Stay tuned!