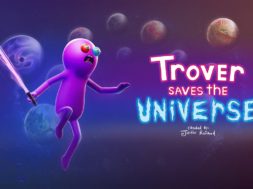 Are you a fan of Justin Roiland or Rick and Morty? Well, if you are then you are in for a fun surprise as Squanch Games has just launched Trover Saves The Universe for VR.

Squanch Games is a studio founded by Justin Roiland and have previously released various VR titles such as Accounting+ and Space Heroes. They are all quirky and full of fun suprises and Trover Saves The Universe is no exception.

In Trover Saves the Universe, your dogs have been dognapped by a beaked lunatic named Glorkon who stuffed them into his eye holes and is using their life essence to destroy the universe. You’re partnered with Trover, a little purple eye-hole monster who isn’t a huge fan of working or being put in the position of having to save the universe. He’s also not that big a fan of you quite frankly.

As your make progress throughout the game you’ll start to notice the signature details of Justin Roiland. Trover Saves the Universe is available today for $29.99. The VR game is available for both the Oculus Rift and HTC Vive users.

Another cool thing that Squanch Games has stated was that all DLC’s for the game will come for free. The studio will keep the game at full price but will release all DLCs for free for that reason.