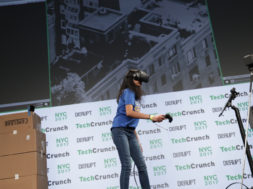 A team of three high school juniors from New Jersey debuted reVive, their VR app for diagnosing ADHD at Disrupt NY 2017 Hackathon. Akshaya Dinesh, 17; Sowmya Patapati, 16; and Amulya Balakrishnan, 17, built the virtual reality app for the HTC Vive using Unity. Disrupt NY is put on by TechCrunch as is taking place now through May 17.

reVive offers a solution that can simplify the lengthy and expensive process of diagnosing the illness. The team reported to TechCrunch that ADHD normally takes six to nine months to diagnose, a process that can cost patients thousands of dollars. While reVive doesn’t seek to replace the role of therapists or doctors when it comes to treatment, it does aim to serve as a telemedicine tool which can speed up the diagnosis process.

According to TechCrunch, “the reVIVE tool is composed of three different tests that gauge the user’s motor skills, sustained concentration and reaction time. Users are asked to perform tasks like navigating a maze, touching colored objects as they light up certain colors and standing still within a defined space. The team created a scoring system to measure a user’s performance that will allow medical professionals to gain a clearer picture of their situation within minutes.”

Medical diagnosing and treatment have already proven to be a major use case for virtual reality. Companies like MindMaze have already achieved unicorn status catering their VR solutions directly to medical professionals. The team believes that diagnosing illnesses is one of “the best use cases possible for VR.”