Review: Stormland Brings The Meaning Of Open World To VR 8.2 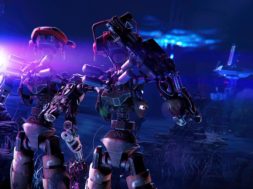 Review: Stormland Brings The Meaning Of Open World To VR

Imsomniac Games first announced last year in May that they are partnering up with Oculus to launch a new AAA VR title called Stormland. The title was slated as a open world VR game with a grand vision of delivering a world where players can roam around and set out on epic adventures as a android being. And while there have been many companies that offered this promise, this holds true with Insomniac Games and Stormland.

You first start off the journey waking up in a foresty environment with robots and gadgets surrounding you. But once you gaze upon yourself you’ll notice that you are built into a cyberborg being.

After leaving the tutorial area you will spend the next few hours really understanding how the mechanics work in the game. This includes creating your first base, upgrading your body, and learning how weapons work. You will also have to learn the mechanics of how to climb, jump, and fly throughout the islands that you are set in. While the mechanics aren’t unique to VR, it is quite polished compared to the average VR game. But there are definitely flaws as well, such as seeing your hands go through walls while you’re trying to climb up buildings.

But a new feature that Stormland offers is the interval of their open world maps. Every seven days, you will notice that the world will change (first stated in Sypher’s log). This will take place around 9AM PST on every Tuesday. The world itself can change from a forest like landscape to a desert one the next week. But Insomniac Games promises that each new map will provide never before seen “peaks, ruins, strongholds, and caves in their expansive cloudscape.”

Insomniac Games wants to deliver an unconventional gameplay experience in virtual reality where things aren’t repetitive. Rather, they want to explore unknown territories and provide a refreshing open-world game through Stormland. This is admirable as many studios would rather take the safe route.

Stormland also offers a co-op feature which will allow you to explore the open world with a buddy. This always provides a more entertaining experience as you to experience virtual reality as a team. While there are some small issues around the co-op experience right now, it still feels enticing enough to jump into the world together.

As far as the enemies go, well, they are quite clumsy in the game. From time to time you will notice The Tempest (enemy robots) do unorthodox things such as running into walls or getting caught up in unconventional ways as you initiate combat. This made the game quite silly and fairly easy at many points.

One thing that people will notice is this game is based around a lot of movement through smooth locomotion mechanics. You will be running, jumping, and flying so for people who have motion sickness, this might not be the right game for you. Of course there are some setting adjustments that you can utilize but it will still affect you if you are prone to it.

Insomniac Games let us know that there are a few bugs affecting the game but there will be patches coming soon to smooth things over.

We believe that Stormland does provide a unique experience with the open world and the ever changing landscapes. If you aren’t afraid of rapid movement in VR and enjoy the thrill of exploring, Stormland is a great game that’ll provide countless hours of fun. This was a tremendous game released by the studio and will offer a lot of hours to log.

Players interested in the game can hop on the Oculus Rift and purchase the title for $39.99.