Review Of Defector: Its Like Being The Main Character Of A Mission Impossible Movie 8.3 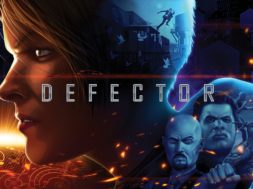 Review Of Defector: Its Like Being The Main Character Of A Mission Impossible Movie

Become a spy in VR

Defector has been a VR game that’s been receiving a lot of hype prior to release. From its teasers to a quick demo, you could feel the impact it was going to have within the VR community. Now it has finally made its public release and here are our thoughts and reviews of the game.

Produced by Twisted Pixel and Oculus Studios, the game centers around you, who is a secret spy, that has to go undercover on special ops missions. You will be able to choose between a male or female agent with various skin tone colors for customization.

You will notice that the missions (5 in total) are flashbacks that lead up to the final point and a jam packed event on Liberty Island, which is where the Statue of Liberty sits in New York.

Each mission provides a variety of stories and action sequences that you’ve never see in any other game in virtual reality. They can last up to around 50 minutes and literally has you standing at the edge of.. well.. really high places sometimes. In addition, the way you solve each mission has a dramatic impact to the outcome of your spy story.

The one big disappointment from the play through was how short the game was. You will probably spend at most around 5 hours completing the full game. But as a side-note, you can play through this story more than once as there are a variety of options you can choose throughout the levels which will bring about a different story and outcome at the end of the game.

You will also notice that the character development is more on the weak side. Characters come in-and-out of every mission and no one seems to matter that much because everyone is already double crossing each other or they are undercover agents that end up dying throughout the stories.

Mechanically, the game is sound. You will notice a smooth locomotion gameplay with 6DoF that makes it fun and enjoyable. Twisted Pixels did a solid job with that portion. You will also notice that the controls are fairly easy to get used to and Twisted Pixels helps you along the way if anything might be confusing with it.

You will also (mentioned before) do things that you’ve never really experienced before in VR. For example, jumping out of a plane that is getting shot down by jets. Becoming a secret agent was also very fun and polished as you have to move around and “fit in” with the bad guys.

The weapons and arsenals are really cool and fun in the game. For instance, using the shock gloves is quite electrifying. But the fun begins when you clear the optional objectives.

Once you clear some of these optional objectives in Defector, you will unlock cool cheats such as the big head mode. Yeah, you’ve seen that in previous games such as Golden-Eye and the goofiness of that always makes the games just more fun.

At the price point of $20 it is definitely worth it to purchase. While the game itself is quite short, you get to experience something new in VR that you’ve never felt before. You also get to transform into a secret agent that has to use your brain to solve some of these high-stake missions. This is an exclusive title for Oculus so currently its only available on the Rift and the Rift S headsets.

tags: defector oculus studios spy vr game twisted pixels
previous Things Get A Little Rowdy In Hotel R'n'R In VR
next Become The Warrior You Were Meant To Be In Ninja Legends
Related Posts