Review: Lone Echo Will Take Your Breath Away 9.0

Lone Echo is a game that many fans have been looking forward to. Created by the masterminds at Ready At Dawn Studios, the game takes us inter-planetary to our neighboring planet of Saturn.

There, you’ll be taking on the role of Jack, an advanced artificial intelligence with a state-of-the-art synthetic body. Throughout the game your main objective will be to assist Captain Olivia Rhodes solve an increasingly threatening mystery as you use futuristic tools, clever problem solving, and interactive dialogue to engage with the world around you.

Captain Olivia Rhodes will request Jack’s help with three main missions in the first section of the game. These objectives can be completed in any order and will give you the tools you’ll need to solve the different types of puzzles you’ll encounter through out the rest of your journey. After exiting the airlock, you can complete a myriad of missions and side missions around the Kronos II Mining Facility orbiting Saturn and beyond.

Lone Echo boasts full locomotion movement in a zero-G environment with 1:1 movement using the Oculus Touch controllers. Players will be able to travel throughout the game freely and be able to boost around using the micro-thrusters on your arms. Players also have the option of climbing their way around to different places on the space station in zero-G, which makes the gameplay so unique.

Zero-gravity is also a huge factor to what makes Lone Echo so great. We’ve never experienced zero-gravity before but this is what we imagine it’d feel like if we were to ever venture forth into outer-space. Floating and climbing around felt realistic to the point that we sometimes moved our body around thinking that we were in Jack’s shoes. In fact, in the review video, you’ll see how we move our body around thinking we need to position it a certain way.

One of the big factors when we review a game lies in details and Lone Echo hit the ball out of the park on this. In the game, you’re able to touch the sides of your helmet to trigger various commands. For instance, when you touch the left side of the headset you’ll be able to raise a shield on top of your mask. If you touch the other side, you’ll be able to turn on the LED lights that are mounted on the helmet. This is a detailed feature we really enjoyed that added to the immersive portion of the game. Instead of simply hitting a button to activate these commands, you have to physically touch the sides of your head to trigger these prompts.

Even the way you communicate with your crew-mates seemed all too real. You literally have to push a button to communicate amongst your team members and you can choose to be silent and not respond if you really wanted to. The game gives you that choice and provides a well-thought detail when it comes to communication.

Another great features in the game were the thrusters. Having the ability to move around at a quicker pace is something that every game needs. Ready at Dawn was able to find a way to add-on this feature while making the game seem realistic as possible. 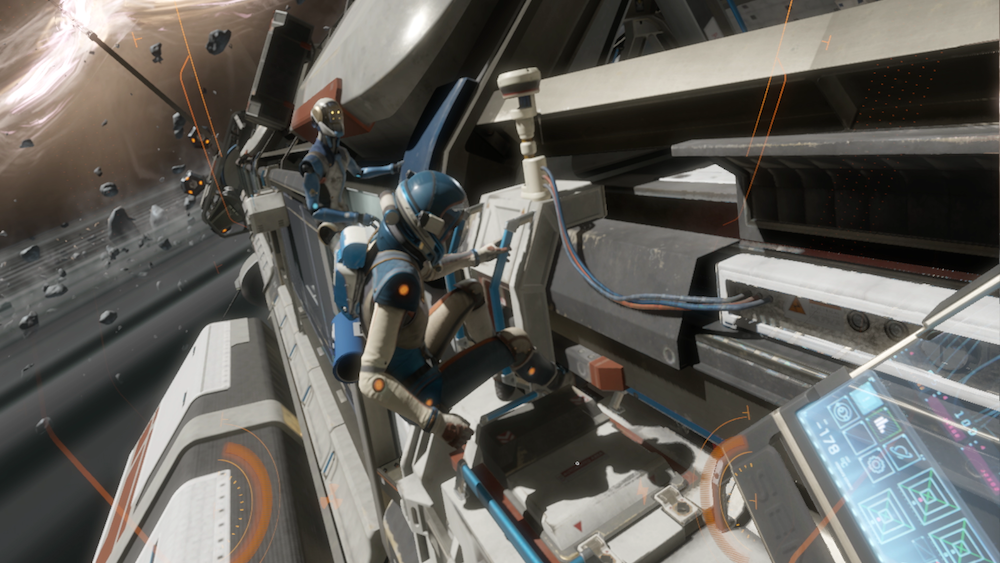 Pushing and pulling your way around the station was also beneficial to making the game seem real. I personally imagine that I’d be latching on to things if I were instructed to move around a space station like Jack does. The studio did a great job providing us with a realistic sense of movement in the game. Plus, we really appreciate the fact that the game offers full-locomotion versus teleportation.

Ready at Dawn also did a great job in assisting first-time players. If you ever seem to get stuck in Lone Echo you can slide open your Arm Computer and turn on a mission objective marker that will lead you where you want to go. Additionally, you can use the dialogue system to ask Olivia (Liv) what happens next. There are also a variety of helpful VO lines that will remind you what to do if you’re having trouble, which is an amazing feature. Space in Lone Echo can sometimes disorient you so having these assistant features are great touches to the game.

Graphics in Lone Echo is by far one of the best we’ve seen in a VR game. From your character, to the set design, to the giant floating planet, everything just looks like it belongs in the game. We’ve seen and reviewed plenty of content to where we can pin-point flaws in an instant but we couldn’t find anything significant to pick on when it came to Lone Echo’s graphics and design. Everything placed in the game flowed well made sense.

Oh and did we mention how the graphics in the game makes you feel like you’re literally in outer-space aboard a giant spaceship? Yeah. As you look off into the distant space, you come to the point where you start wondering, “Is this really what Saturn would look like from this angle?” When a VR game has the power to provoke your mind like Lone Echo did, it shows that there’s something really special about it. 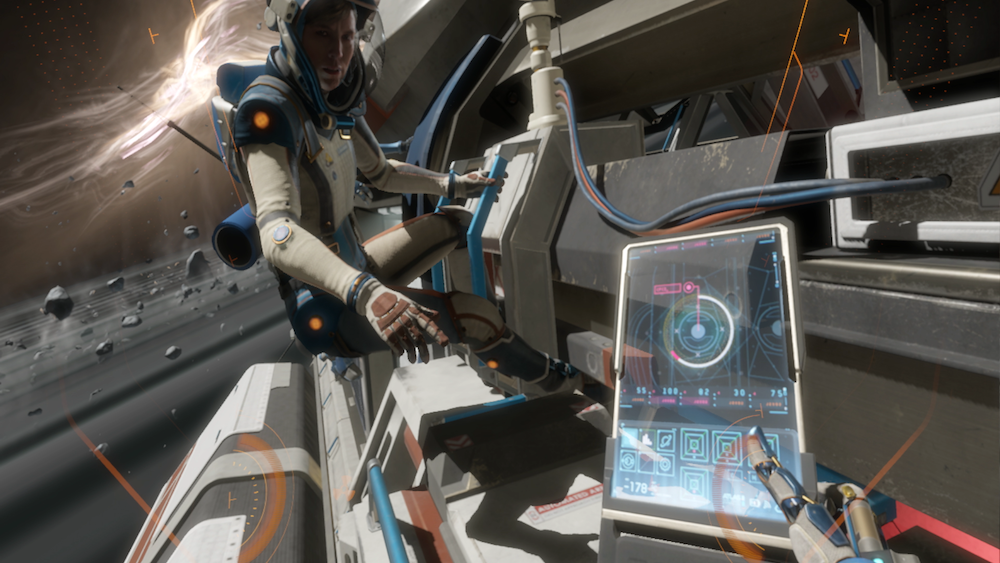 We won’t be giving away any spoilers here. We just want to talk about the quality of the storyline. During our long duration of gameplay, Lone Echo really gave us a special vibe we rarely find in games. The characters in Lone Echo, such as Liz, actually made us feel as if we’ve known them for a very long time.

There’s really an enchanting vibe around the story where players gradually start to build a personal relationship. Liz actually became memorable to me and that’s something I don’t see in other VR games today.

There’s also parts in the game that really grasp your attention. One of the most memorable moments for me was when I floated by a pitch black area around the ship. For some reason, I started to imagine that a creepy alien was going to pop out and eat me or something like we were in an Alien movie. The game has that powerful presence over you where you start to second guess a lot of things and that’s what makes it so compelling. Even though nothing popped out to eat me, my imaginations started to run wild and I really appreciated that moment about the game.

Really, the only issue we had was fatigue. When we played the game for long durations in-time we started to feel motion sickness. You have to do a lot of moving while being in virtual zero-G so you should definitely pace yourself when playing Lone Echo.

Lone Echo will also have a competitive multiplayer component to the game called Echo Arena. Oculus has plans to bring Echo Arena into the esports circuits in partnership with Intel and ESl. Make sure to read our review and details about the game.

Lone Echo by Ready at Dawn Studios is honestly one of the best games we’ve played in VR. At a price-point of $34.99 you definitely are getting your money’s worth. This is a worthy AAA VR title with an immense storyline. The game would even make sense with a full console game price tag of $59.99. Make sure you don’t skip out on Lone Echo as its a unique VR title that’s surely worthy of your attention. This game is an exclusive title for Oculus Rift. Make sure to pick yourself up a pair if you don’t own one as their Rift + Touch bundle is currently on a ridiculous sale.