During this year’s OC6 conference, Oculus has revealed the anticipated AAA VR title from Respawn. We now know that it will be called “Medal of Honor: Above and Beyond.”

About Medal of Honor: Above and Beyond

Medal of Honor: Above and Beyond will be an immersive VR experience set in World War II, where you step into the boots of an agent of the Office of Strategic Services (OSS) in war torn Europe. A deep single-player campaign takes you through historic events on land, air, and sea, sabotaging Nazi bases, subverting enemy plans, aiding the French Resistance, and much, much more. With the Oculus Rift, the team will be bringing players into the Medal of Honor series in an entirely new way that transports you back to Europe in the 1940s.

“From the beginning, Medal of Honor has taught gamers about the tremendous sacrifice and heroic efforts made by earlier generations to safeguard our freedom,” says Peter Hirschmann, writer of the original Medal of Honor who’s returned to direct this new addition to the franchise. “Thanks to VR, we can actually put a player in the boots of a WWII soldier with Medal of Honor: Above and Beyond—the immersion that the Rift Platform provides lets us tell that story in a really meaningful way, sharing the full impact of the sacrifices and camaraderie of our shared history. Interviewing veterans of WWII was an immense privilege and allowed us to ensure its respect and faithfulness to those who served. They’re helping us drive home the full emotional and historical weight of this subject matter with players in a way that really resonates.”

Respawn was acquired 2 years ago by EA but that didn’t stop the new title development from both the companies. 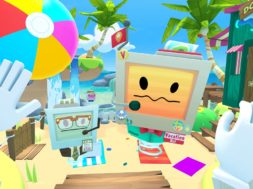