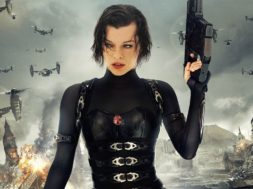 Resident Evil is finally making a comeback on to the big screens. This will be the final movie installment of the long running franchise named Resident Evil: The Final Chapter.

Resident Evil has been a fan favorite game for over a decade now with its crazy zombie story lines and the horror that encapsulates the game. With its success as a video game, they adapted the first movie in 2002 that followed the games story line (not to the fullest). And as a tribute to the final movie which will arrive in theaters on January 27th, Sony Pictures Entertainment released a 360 VR experience.

In the VR video you’ll find Milla Jovovich introducing us to the upcoming experience. Shortly after the briefing, you’ll be thrown onto an area called the “Killing Floor” with zombies hung on chains. You walk through the area and find creepy zombies trying to essentially eat you alive.

You’ll also find zombie dogs and a super zombie that crowd you towards the end. It’s quite a frightening experience so watch with caution. I personally believe that Resident Evil is a couple steps up in the scariness level when comparing it to shows such as iZombie and The Walking Dead (which has its own 360 VR video experience).