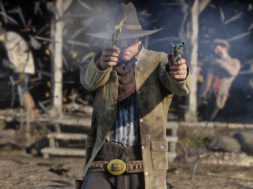 Rockstar Games has finally announced their sequel title, Red Dead Redemption 2, will be releasing on October 26th, 2018. For those unfamiliar with the franchise, Red Dead Redemption is a game that takes you into the wild wild west where you play the game as a former outlaw looking for a new life in America.

The original Red Dead Redemption was released in May 2010 that went on to be a big hit in the world of gaming. Red Dead Redemption provided you with the freedom to roam around in a vast open space while horse back riding in the desert terrain. Finally, we will be seeing the sequel com alive in October after 8 years of waiting.

Red Dead Redemption 2 will follow a new story of outlaw Arthur Morgan and the Van der Linde gang as they rob, fight and steal their way across the vast and rugged heart of America in order to survive.

Red Dead Redemption 2 will be releasing on both the Xbox One and PS4. No word yet about a PC release. While Rockstar was hoping to get this game out earlier, they wanted to polish it up a little more so that we can enjoy a better experience. “We apologize to everyone disappointed by this delay,” said the Rockstar Game team. “While we had hoped to have the game out sooner, we require a little extra time for polish.”