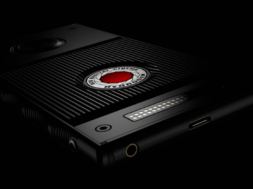 Jim Jannard, who’s the founder of Oakley and RED Digital Cinema, is one of the most successful entrepreneurs of all time. He’s transformed many industries with his sports apparel company and the very high-end cameras that everyone seems to be using. Today, he’s looking to tackle the VR, AR, and MR industry with a special product called The Hydrogen One smartphone.

Another unique feature to the Hydrogen One is that it’ll be compatible with Scarlet, EPIC, and Weapon as a user interface and monitor.

Price? Well, don’t hold your breath. Just like the astronomical prices seen for Red Digital Cameras, you’ll be forking out $1,195 for the aluminum version and $1,595 for the Titanium version. Order that are placed today will ship from their own personal first production batch. After this initial release, RED will not be able to fill all order on time due to display production limitations. Shipping and taxes are not included in the price.

On top of the Hyrdogen One media machine, you’ll be receiving a USB-C cable and charger, an expandable micro SD card slot plus a “special small token” for ordering early. RED expects to ship the Hydrogen One smartphones in Q1 of 2018. What are your thoughts on this AR product?