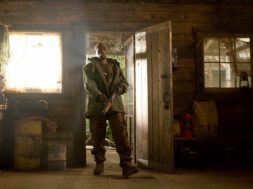 Earlier this year we announced that Wesley Snipes will teaming up with Mauro Borrelli to release a feature VR film called The Recall VR Abduction. Yesterday, This thirteen minute long virtual reality companion film released on Samsung Gear VR and Oculus Rift which takes you through a mind bending experience where the featured characters must defend themselves from evil aliens.

“The world of entertainment consumption is rapidly changing, this is our contribution to provide fans more ways to view and experience content than ever before,” said Wesley Snipes, Producer of The Recall and The Recall VR Abduction. “This experience in VR makes you feel like you’re a part of the movie!”

Alongside Wesley Snipes are co-stars RJ Mitte (from Breaking Bad) acting as a character named Brendan, Jedidiah Goodacre as Charlie, Niko Pepaj as Rob, Laura Maria Bilgeri as Annie, and Hannah Rose May as Kara.

The Recall VR Abduction app will give you a chance to see a 360 degree custom environment where you can explore through the headset. The system app is capable of streaming multi-format videos so users can access the feature length film, The Recall in traditional 2D format as well as the multi-screen, panoramic Barco Escape format of the movie. In addition to offering three different formats through its in app purchase integration of the movie, the app will contain trailers in multiple formats, cast stills and extra exclusive behind the scenes video content in 2D format.

“We wanted to push the boundaries of what was possible with VR, while condensing an hour and half feature film into a 13 min experience,” said Travis Cloyd, VR Producer. “The Recall VR app paves the way for film producers to monetize their multi-format content through virtual reality platforms.”

The Recall VR Abduction app is the world’s first and only in app transactional multi format movie experience. The app teleports you to the world of The Recall and welcomes you into the exclusive media lounge where you can immerse yourself in The Recall VR Abduction, enjoy “The Making of The Recall” in a giant home theater screen, and experience the trailers in 360-degrees, Barco Escape, and Standard 2D formats. This is the first app to enable monetization of video content within the free app.

This VR film is based on the full release of The Recall which had a limited theatrical release in 2D theaters on June 16. You can download the app today for Gear VR on the Oculus store for free.