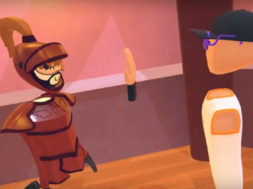 Bullying is a huge topic these days. From physical or verbal in-person bullying, to cyber bullying, and now to VR bullying, it’s a topic that many seek to address and prevent, as it can be extremely devastating to ones’ sense of self, causing a range of reactions from anger, revenge, depression and even suicide. Rec Room, the VR social club that lets users play active games with other players from around the world, is taking preventive measures to safeguard their users from unwanted harassment.

Watch the clip below to see how Rec Room’s simple gesture tech update quickly and easily keeps bullies at bay.

Rec Room’s developer Against Gravity has noticed that some people feel even more threatened by harassment in the VR space, and they want to make sure that users have a positive experience while in their virtual environment. Some of Rec Room’s most popular games are disc golf, 3D charades, paintball, dodgeball, paddleball, shield soccer and more. Rec Room also invites users to simply hang out and shoot hoops in the locker room with friends new and old. According to their site, “Rec Room welcomes people from all walks of life, from all around the world.” They invite users to “come and join the fun!”

Rec Room is available on Steam for HTC Vive, Oculus for Oculus Rift.