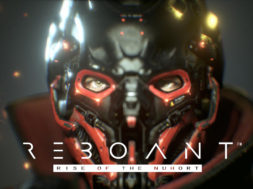 During this year’s ChinaJoy event, many things were revealed about HTC’s plan on how they’re going to grow the VR market. This includes news about the standalone VR headset that’ll be releasing in China later down the road. Today, another bit of news has been revealed about an upcoming VR title, Reboant: Rise Of The Nunort by Darklord.

Reboant is a visually compelling first person shooter game that looks quite promising from what we can see in the trailer. While everything we saw was pre-rendered content, the graphics look phenomenal. The story behind the game will take place in the past, present, and future where various civilizations must find a way to survive and win.

After the end of the ancient universe of war, the echo of the war has continued, the contradictions of several factions in the future of a node in the world together. A complex background of the special forces landed in the distant Nuhart Star, the new prelude to start. The advancement of the world view and the plot will advance with the player’s game experience slowly.

The game is set to launch some time this year on the HTC Vive but hasn’t been confirmed yet on its release outside of China.