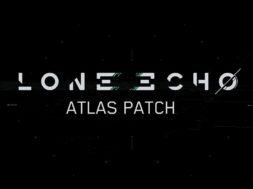 Lone Echo by Ready At Dawn Studios won the coveted VR Game of the Year award last month voted by the fans. The game provided a highly immersive experience where you get to experience zero-G on the outer rims of Saturn. Now, Ready At Dawn studios in partnership with Intel has announced the Lone Echo Atlas Patch which adds a number of new high-performance features to the game to enhance the play experience.

With High Performance Mode enabled, specific areas of the game will have additional floating set dressing.

Normally, the Jack Husks that are left behind at the location of a player’s death will be inanimate objects that appear in a huddled position. However, by enabling High Performance Mode, Jack Husks will gain full ragdoll physics, causing their limbs to have full mobility.

You’ll notice how zero gravity has more of an effect on objects and character bodies. Things will float more naturally and more objects can be manipulated aboard the space mining station. The Lone Echo Atlas Patch is now available and if you don’t own the copy of the game you can purchase it today on the Oculus store.