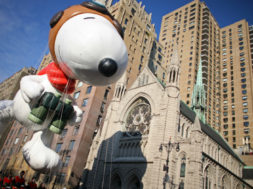 Yesterday was Thanksgiving, a day for traditions, family and Macy’s Thanksgiving Day Parade. And with this year being 2016 and all, what better way is there to re-live and re-watch the infamous parade than to view it in 360 VR. With the help of Verizon, you now have a chance to see the whole spectacle in a 360 perspective.

When you tune in, you’ll be hosted by Marlon Wayans. He’ll provide you the intro to the parade and what’s to come in the long line-up (There’s a Pickachu balloon this year). The really cool thing about watching the Macy’s Thanksgiving Day Parade in 360 is the ability to control where you want to see. While the bands and entertainers pass by, you’ll be able to control the focal point of the video.

Since this video is on YouTube, you’ll have the options of viewing this 360 video on a traditional browser or on the new Daydream View VR headset. With this Google headset, you’ll be able to view the 360 video with the simple turn of the head.

We hope you enjoyed your Thanksgiving Day. If you’re in the mood to watch the magic of Macy’s Thanksgiving Day Parade, this 360 VR option will be a suitable choice to do so. The parade lasts around 2 hours and 30 minutes.