Race To Win In BlazeRush VR

Race To Win In BlazeRush VR

Racing games have always been about trying to win and claim 1st place. As Ricky Bobby from Talladega Nights said, “If you ain’t first, you’re last!” And that’s exactly the mentality you need going into BlazeRush.

BlazeRush is an Oculus Rift experience that genres under action arcade racing survival game. It was one of the first 30 games released using an Oculus platform and Oculus Rift headset. It was developed and published by Targem Games, a studio in Russia. It’s an action racing game recommended for everyone. It can be a single or multiplayer of intense car racing played locally or online. The number of players allowed are four locally and up to eight players online. Each player has an option to choose any of the sixteen top-down combat vehicles. The player needs to adapt their skills of racing style and technique to beat other players and pass through obstacles and tracks. 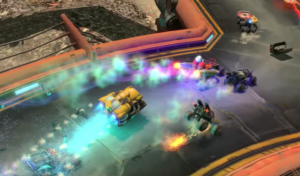 The main goal of the game is to reach the finish line first passing all tracks (obviously). The players can use various weapons on course for attack and defense. There are power boosters for each weapon such as nitro, rockets, and pulse variations. The car racing takes place in three different planets undergoing global changes. At Planet Lava3 you’ll find a giant scrapyard with drilling rigs and industrial quarries. At the Green Giant Forest you’ll find a planet with ancient civilization and buildings ready for racing. The third planet BG-13 is the most dangerous race track because of the presence of a hot organic cauldron.

The single play experience is very rewarding because of medals to achieve and be able to unlock new cars as well as races. It also has matching system on multiplayer that is easy to set up. The tracks and the opponents give a real challenge to the players. The controls are also easy for everyone to play. The visuals are also clear and the game runs perfectly smooth. The game gets tougher towards the end with unlocked cars using different weapon resistance. There are a lot of weapons to use to push the opponents outside the track and the slime to slow them down. The carrier missions can be played locally with friends.Winning in the game isn’t possible until the end because the cars are teleported back even if it falls off the track.

BlazeRush is an excellent game to play with other players. You can find the game for the Oculus Rift at the Oculus Store and regular play on Steam. Have a great time racing in VR with your friends!